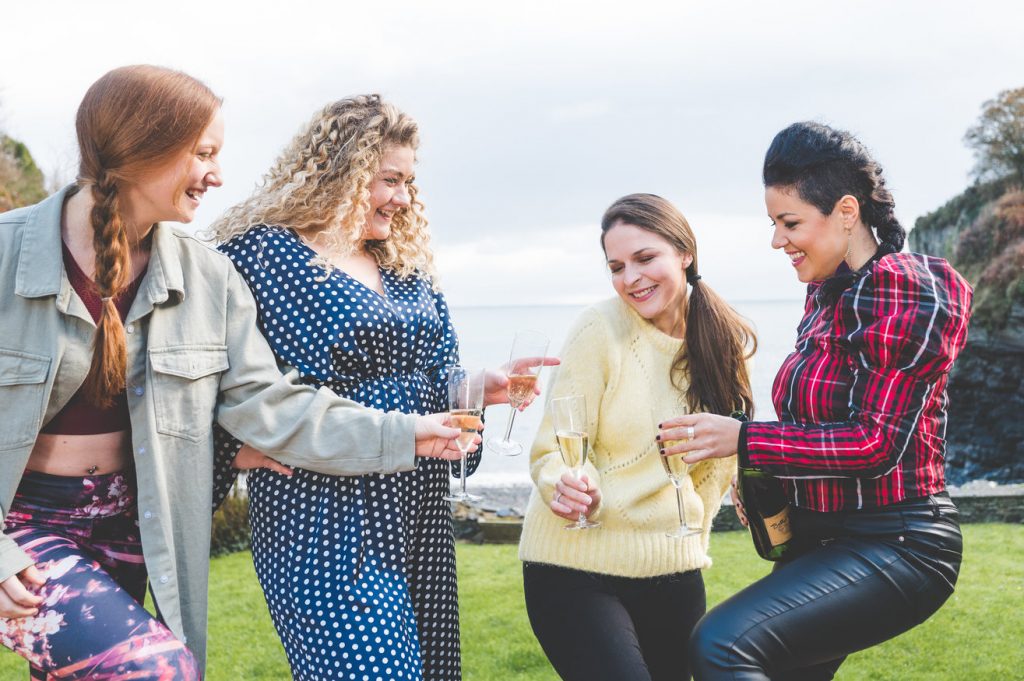 Filming has finished and post-production work is well under way in the latest series of the popular crime drama 35 Diwrnod (35 Days) which will air on S4C from Sunday, 26 April at 9.00pm.

Last year the iconic S4C brand changed from 35 Diwrnod to 35 Awr with all the action happening over 35 hours in a country hotel. The writer Fflur Dafydd was nominated for a Bafta Cymru for her work on the series and now she’s back as writer for the fifth series 35 Diwrnod: Parti Plu (Trans: 35 Days: Hen Party).

Beth (Gwenllian Higginson) and her husband to be Dylan (Geraint Todd) are going to have a wedding that promises to be second to none. With 35 days until the big day, everything is in place: the designer dress, vintage bunting, a sushi buffet and guests to die for.

On the guestlist is the old gang from school – the best friends all together again for the first time in five years. A lot has happened in that time – so how do they now come to terms with this and rekindle that relationship?

Fflur Dafydd tells us a little bit more about the drama which runs over six episodes: “The story opens with a group of women (and one man) in a wedding dress fitting, 35 days before the wedding. At the heart of the story is the fact that this group have known each other since they were young but there are tensions in their friendship following something traumatic that happened five years ago.”

“Also, we become aware that one of the friends is absent, but we don’t know what has happened to her. Is she still alive? Where is she? There is an element of mystery from the very beginning surrounding this wedding and there is a tension there which we don’t quite understand but becomes more obvious during the series.”

“There will be a body, like every other series of 35. At the beginning of the first episode, we see a veil in the water, and a girl lying face down. We know from the outset that there has been a murder and we work back from there – as we do with every other series of 35. But despite the whodunnit element – I think with this particular series that the characters and their secrets become far more compelling.”

S4C’s Director of Content Amanda Rees said: “The ‘35’ brand has been very successful for S4C and is now one of the channel’s most iconic series. The production company Boom has succeeded in capturing the imaginations of our viewers and kept them on the edge of their seats through working with top Welsh talent both in front of and behind the camera. I am delighted that this exciting and innovative drama is returning to S4C this spring.”

Producer Paul Jones of Boom said: “The challenge with every series of 35 Diwrnod is not only to create a new and interesting world but to once again come up with new ways of killing people!

Also, in the latest series, if you notice, it is not completely clear who the corpse floating in the sea is. So the viewer has an extra task this time, not only to work out who the murderer is but also to play the game and try to work out if it is the bride’s corpse floating on the sea or someone else?”