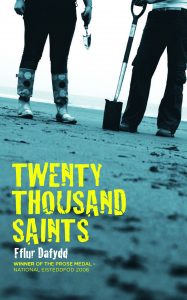 Archaeologist Deian returns to the island of his childhood, where his mother disappeared without a trace. Sister Viv, closet heretic and host of the annual conference of hermits, has erected for her a gold memorial declaring her unofficial sainthood. Documentary-maker Leri, meanwhile, is pursuing a story she is keeping from her assistant and lover, Greta. This has less to do with birds and saints’ bones than with real bloodshed. During one hot August week, lives collide as Bardsey twirls once more for the cameras. A black comedy about finds, losses, secrets, privacy and intrusion…and how the most important things always happen off-camera.

“The most compelling novel I’ve read in years: a love-story, a thriller, and a profound meditation on language and identity.”
– Peter Florence, director, Guardian Hay Festival

“Wry, engaging and perceptive, Twenty Thousand Saints is a beautifully rendered story of multiple forms of enquiry and excavation – spiritual, linguistic, filmic and sexual. Dafydd’s laid-back narrative voice seems perfectly tuned to her cast of characters and the changes that befall them when they encounter this novel’s most dominant personality, the isolated island of Bardsey herself, and all the secrets and history she holds.”
– Owen Sheers

“A true artist with a talent for dialogue, atmosphere and character… and a mesmerising lyricism.”
– Grahame Davies

“The prose is luminous and Dafydd writes with a poet’s eye – a beautifully crafted piece of writing imbued with a strange power to hold the attention of the reader on the eternal questions of love, loss, communication, passion and what it is to be alive. Anyone with an interest in the human condition should have it on their shelves.”
– Dai Blatchford, Swansea Life